This pub is a nano pub. Claims to be the first nano pub in the UK. I don’t doubt it. . It is very small. If you look at the photo below, the width of the pub is the door and four panes of glass. The landlord told us that once he had 37 people in there. All I can say is, they must have know each other extremely well. It is small. AND NO hand pulls. You look at the beer list and tell the landlord which beer you want, he disappears behind a door and comes out with a ceramic pitcher of beer. I had not seen this before, but my companions told me that he only has the use of one arm, so the pitcher makes sense.

Click on the panoramic photo below to see the pub in all its’ glory. Realize that a pano photo distorts the reality of the subject. The gent on the camera’s left is sitting on the same bench as the my friends to the camera’s right. And lets not talk about all of the nicknacks on shelves and hanging from the racks in the middle of the room. Feel free to zoom into the pano photo and check the stuff out.

I noticed that there didn’t seem to be a restroom that was obvious in this place. I was informed that to get to it you had to walk through the mysterious door that the owner kept popping behind to come out with beer. 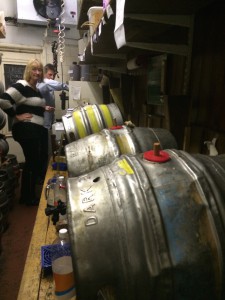 The above photo is right behind the door. The door behind the landlord and his wife leads to the bathroom. The next photo is a shot looking from the above door back towards the pub area. 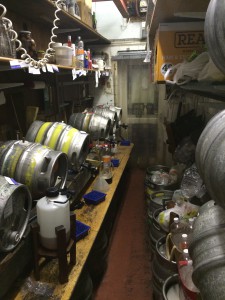 After using the restroom, I came out to the area I was standing at previously. There was a small glass of some unknown beer sitting there. I was told to drink it and see if I could guess what it was. I took a smell and a few sips and said ‘I’ve had this beer before’. I said JW Lee’s. The landlord said ‘I hate Americans”. It was said in jest. I had nailed the beer. He then tells me that he has stored firkins of this beer that he’s saving. I think he said first one was from 2005. The next photo is a shot of his ‘collection’ 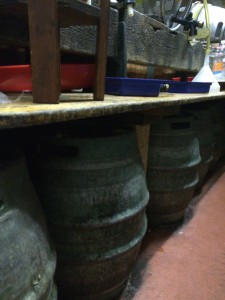 Yep the firkins with patina on them. The man has a vertical of firkins on JW Lee’s Harvest Ale. He then showed me most of a part of a case of bottles from Whitbread, Back when they made beer some 20 years ago. He had other unique items in his stash as well. He had beers from the years his kids were born in. How frigg’n cool is that?

As I left my tour of his archival beer, I started talking to a gentleman who it turns out is best friends (best mates in England) with the professor (Dr. Keith Thomas) who started BrewLab where I’m studying at currently. Keith is currently one of my teachers.

We left this pub and journeyed to the next pub in town called The Black Dog. 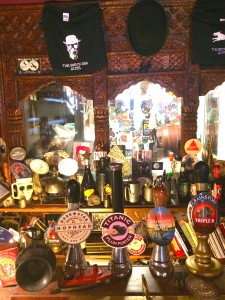 The hand pulls didn’t seem to be active (or even work) All beer was gravity fed in the back.

Here is a photo of the room where the firkins are kept. You can see it through the windows in the above picture. 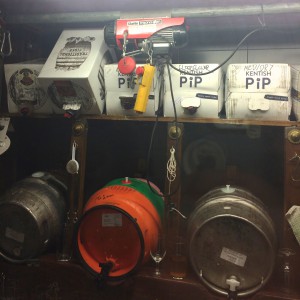 Some of the beers in their stillage area. Notice the wench above the white boxes to lift the firkins up to the rack level

While here we run into Martin, a small brewer who brews out of his house (I think). We first met him at the Butchers Arms where he let us try a brown ale he’d made. He lives around the corner and he invites us to try some of the other beers he’s made. So we walk over to his house and we tried some 8 or 9 of his beers. Then we ended up going out to a nice dinner at a restaurant. What a great night on many levels.

2 Responses to "Pubs in Canterbury"