The casks used in real ale are historic in nature. They come in various sizes and each size has a name.

From the largest size down to the smallest.

Hogshead
The hogshead of beer and ale was equal to a quarter of a tun, half a butt, a barrel and a half or three kilderkins. This unit is close in size to the wine hogshead.

Barrel
The barrel of beer or ale was equal to two kilderkins or 2⁄3 of a beer or ale hogshead. This is somewhat larger than the wine barrel.

Kilderkin
The kilderkin (from the Dutch for “small cask”) is equal to half a barrel or two firkins.[2]

Ale Firkin
The ale or beer firkin (from Middle Dutch vierdekijn meaning “fourth”) is a quarter of an ale or beer barrel or half a kilderkin. This unit is much smaller than the wine firkin. Casks in this size (themselves called firkins) are the most common container for cask ale.

Pin
A pin is equal to half a firkin (4.5 imp gal or 20 l). Plastic versions of these casks are known as “polypins” and are popular in homebrewing. The word “polypin” has subsequently become commonly used in Britain for bag-in-box containers of any size.

Gallon
Originally the 282-cubic-inch ale or beer gallon was used. With the adoption of the imperial system in the United Kingdom and its colonies the system was redefined in terms of the imperial gallon. 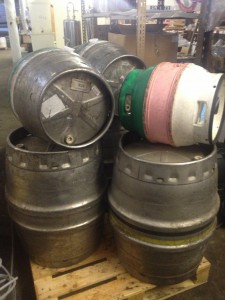 Firkins on the top and kilderkin on the bottom. Notice the plastic firkin on the upper right 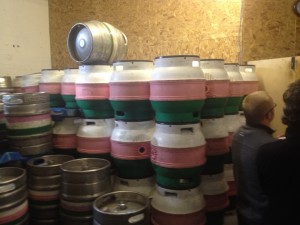 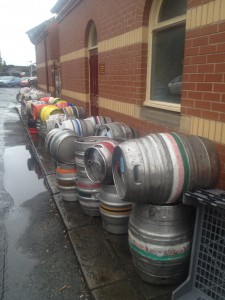 Pile of empties to go back to the breweries. At the Track Side Pub in Bury. 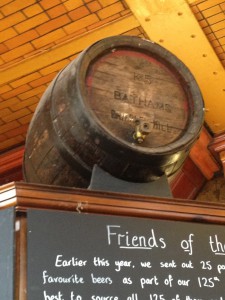 A Old wooden firkin on top the bar at the Marble Arch in Manchester. 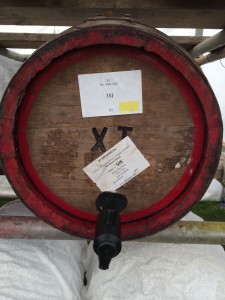 An active wooden firkin. The only two of the 750 firkins at Reading 2014