Still unemployed. I have applied for a few brewing jobs with no luck. I have also realized in my unemployed state that I want to work somewhere where I can just be a brewer, working under a head brewer that has worked at some high profile breweries. Since coming back from the UK brewing school, I had hoped to work in the above condition, but it has not occurred. Every place I worked has been me being THE brewer. I want to learn from someone else in a brewhouse situation. The more that I get to know the breweries in my area, the less I find that situation I want to be in.

At least I know what I want now. At first, I just wanted to work in a brewery. Now I know under what conditions I want to work.

The beer I’ve made has been hit or miss at Dragon. I made some good beers and some not so good. I really need to be someplace where I can observe and learn.

Well, I had to quit at Dragon. I loved working there. I had figured out the brew system, I was working on getting the beers standardized. I had come along way. The problem was that the owner felt like I wasn’t worth paying on a regular basis. She had missed a lot of  paydays. LOTs. She was doing good at paying me in August and then in September, three weeks were missed AND she hires a chef for the kitchen. Knowing that she really sucked at back pay, I slowly cleaned out my personal property over a week or so and without notice, I quit. In my defense, she didn’t give me notice when she decided to not pay me or when she cancelled my health insurance in June 2018. Then she turned into a real psycho via email. Turns out she hated my beer and I sucked at everything I did.

I recognized that she had filed bankruptcy and was in trouble. She seemed to think I was an investor. I stood nothing to gain by forgoing my paycheck. There was nothing for me on the back end of the business. IF the brewery took off and did well, all I would get would be backpay.

Still cranking along at Dragon Hops. Did an Octoberfest beer. Learned a bit from it. Higher saccharification rest temperatures really do make a beer with more body, a higher final gravity and sweeter. It’s a good beer, just has more body and is sweeter for an O’fest.

One of the things I love about brewing is learning. You just never quit learning and I think each person learns in their own way at their own time. Sometimes multiple ‘things’ have to present themselves for you to glean ideas of thought from them.

After coming back from my Beer training in the UK, I have alway thought that I would like to brew under someone who I learn a lot about brewing from, but this has not been the case. I’ve worked by myself or I’ve worked in situations where I’m the one who has more experience. Not a big deal, I’ve had a blast.

A few weeks ago, I borrowed some Munich malt from another brewery. When it came time to replace it, I did not have the German version of this malt, I had a Canadian version. I took the malt to the brewery to pay back and the owner/brewer wan’t in. I left the malt and sent him a text message about what I had and I was hoping it was ok to pay him back with the Canadian version. His returned text was ‘We don’t mix European and Canadian malts’ I was shocked, kind of. I know this guy is a great brewer and very meticulous, his beers are very good, but coming from my history and habits, I just had a mental block on the conversation. I have to say that this has moved my thought process and I have become a better brewer just from this text message. It is now the next morning and I am still full of that feeling you get when you learn something significant. Wow.

I just never paid much attention to where the grains were from when making a beer. I come from the home brewer world, where you get what’s available and a lot of the time you are substituting this ingredient for the ingredient you really want for your beer.

Sure when I make English beers I use English malt, I don’t use Belgian malt when making Belgians, or pay much attention to German malts when making German beers.

Why not? I am in a position where I can pay attention, but for some reason, I never have.

Well, from that text message, I essentially got to learn from another brewer who I could learn a lot from.

God, I love this profession.

P.S. The brewer is Bill Haase and his brewery in Black Hoof in Leesburg, Virginia. If you find yourself anywhere near Leesburg, you should go and have a few. You won’t be disappointed.

Been a while since I posted here. Things are going well at Dragon Hops. I’m on my 11th gyle. Getting things figured out with the brewing equipment. Happy with most of my beers so far. Have had some carbonation and clarity issues. I’m getting there tho’.

We are starting to get some stuff together at the bar. I need more (hell, more, SOME) communication with the serving staff. We need some conventions put in place so that the beer communication flows between me, the bar staff and the customers. The staff need to know what I’m doing in the brewery so they can have good conversations with the customers.

I did a podcast yesterday.  BrewDaddies is the podcast.

Well, I have everything I need to start brewing except the nod from the Virginia ABC. The agent found a small paperwork problem. Hopefully this will get remedied quickly and we can start brewing.

The first three in the brewing lineup, a Stout, a saison, an IPA.

Got some of our furniture today. Very nice stuff. Amish made. 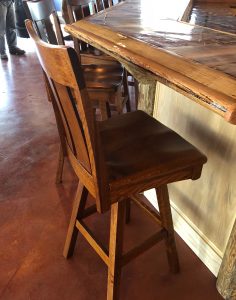 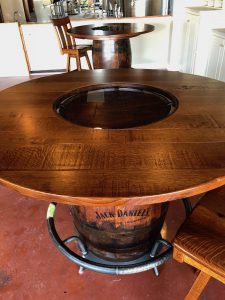 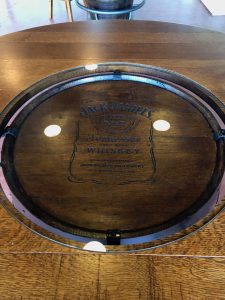 They will be replacing the barrel tops with a Dragon Hops Theme.

I took apart the Mash tun false bottom. From looking at the false bottom from the outside, it kind of looked cheap. 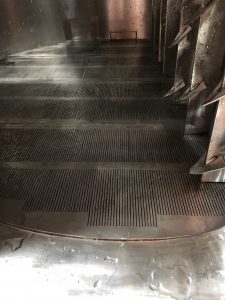 After taking the false bottom out, it is quite a quality, sturdy, well crafted product. 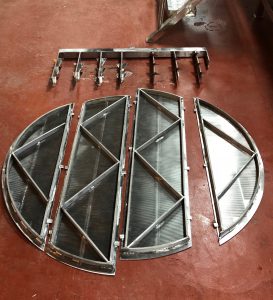 Look at the support brackets. These four sections are rock solid and the fit in the mash tun leaves little space to allow barley malt to slip through.

I got the last two vessels passivated today. I really hate Nitric Acid. It affects me physically. Leaves a strange taste in my mouth (no, I’m not drinking it, just from the mist). I only have the three brewhouse vessels to do, but I need the pumps wired before I can do that.

Got 5 fermenters passiviated.today. I figured out a way to get all but a few drops reclaimed into the CIP. Love the CIP.

I start passivating the tanks tomorrow. The brew system is getting wired today. The place is coming together. I’ve been using the CIP station (Clean In Place station) It is two tanks and a pump on a cart. I can heat one tank and I can reclaim almost entirely the chemicals I put in a tank to clean. I only loose what is in the hoses. 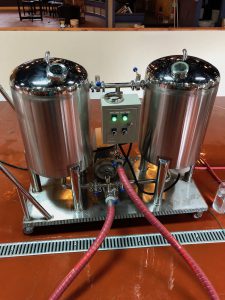 We are getting close to the time that I starting working with the equipment. We have had to have a fire suppression system installed, upgrade the amperage on the power and plumb the glycol for the fermenters. Long road, but we are moving in the right direction. On the 18th December I go full time. 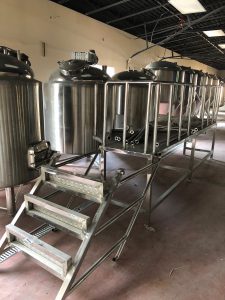 The photo above is the brewing system. It is not really in place yet, but is near where it will be when set up. First week will be cleaning and pacivation of the stainless steel. We have 10 vessels that I need to work with.

I have accepted the brewer position at Dragon Hops Brewery. The brewery will be making the announcement after the web site gets reworked. I thought I’d throw it up here in the meantime. The floor drains are almost ready to have the concrete poured around it and the building is in a state of rebuilding. The brewery will also have a restaurant. The first part to be built out will be the brewing equipment area that way I can get to work getting the tanks ready to use while we wait for the legal paperwork so we can start brewing.

I am consulting at Dragon Hops Brewing in Purcellville, Va. as they get going with their brewing project. 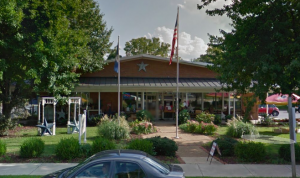 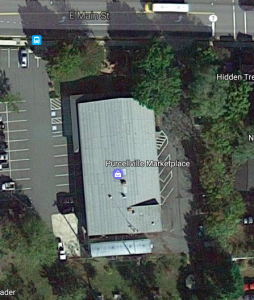 They have a lease on a building and have done some of the renovations on it. The building was once a Safeway Grocery store. It is big and has parking on both sides. There is a distillery and another brewery within walking distance and they are in the center of the town. They have equipment on order and are working on getting legal with the Feds and the State.We are also discussing my work as a brewer there. They are not up and running as of yet.

While the above project is perking along, I’m working a little at Lost Rhino in Ashburn and  Old Trade Brewery in Culpepper, Virginia. At Lost Rhino, I’m working currently on the canning line and at Old Trade, I’m helping out with setting up the glycol system and the controller box for the HTL and mash tun.

Dragon Hops Brewery gets their equipment. 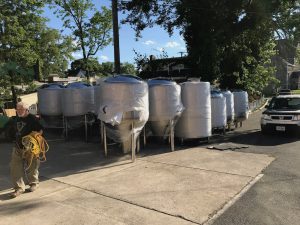 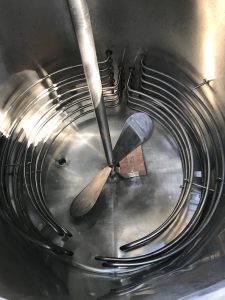 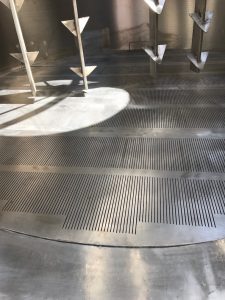 I have to say, I am surprised and impressed with the breadth of what was ordered. They have 5 FVs, 2 Clearing tanks, A 3 vessel brewing station, a Glycol chiller, Mill, CIP station, Plate chiller 3 pumps and I’m sure I forgot a few items.