A cask is container made of either wood, stainless steel or plastic. It has two holes. On top is a larger hole like a bung hole and on one end is a smaller hole for the tap. 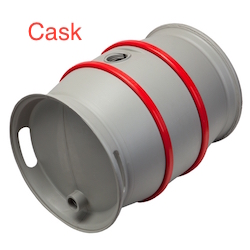 These holes are plugged with a one time use plastic or wood insert to make the cask hold beer and not leak. 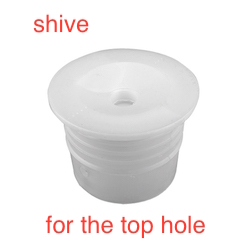 Casks can be of many sizes. The most common is the firkin or 9 (it holds nine imperial gallons).

The brewery sanitizes the cask, hammers an insert called the keystone into the smaller hole on one end. Then they fill the cask with beer, some form of sugar, a fining agent which clears the beer, usually isinglass and maybe some hops. Once full, the top hole is plugged with a what is called the shive. Now you have a full cask ready to be aged and sent to the pub. Since sugar was added to the cask before sealing, the beer starts to ferment again as the yeast present in the beer eats the sugars. This fermentation is important because it adds to the dissolved CO2 in the beer giving carbonation to the beer. 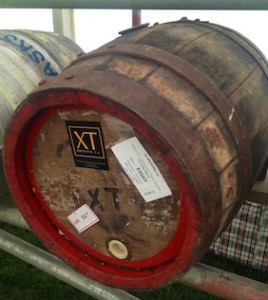 Once at the pub (or beer fest), the it is placed on a rack called stillage, where it is NOT moved until it is empty. The casks are chocked on their back side in such a way that the rear of the cask is higher than the front. This allows most of the beer to be able to drain from the cask. It is chilled to cellar temperature 50-54F either because it is in a cellar or the room is conditioned to cellar temps. The cask is allowed to rest for some time, usually days. At Reading last year, the rest was one day. The next step is to vent the cask.

Venting a cask means allowing CO2 to escape from the vessel. This is done by using a rubber mallet to drive a wooden dowel into the center of the shive.

There is a spot in the center which is intentionally there to punch out. This ‘spot’ is called the tut. The dowel is called a spile. There are two types used. A soft spile and a hard spile. The soft spile is porous, made of a balsa type wood. The hard spile is made of a hardwood. Below are photos of a two casks one with a soft spile the other a hard. 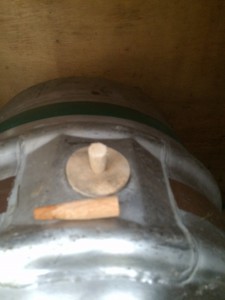 This is a soft spile with the hard spile laying in front as is the proper custom. These two will be exchanged as needed daily. The soft spile is a very porous wood like a balsa wood of some sort.

This is a cask with a hard spile in it. Hard spiles do not let much CO2 out or air in and must be replaced with a soft spile before serving beer. If on a beer engine, and a hard spile is in place using the beer engine will cause a vacuum in the cask pulling the CO2 out of solution ruining the beer. There is also a plastic spile which is used in a pub to insert into the shive at night at closing time for a better seal. The hard wood spiles do not seal totally.

The cask is then allowed to rest. At Reading, We vented on Tuesday and moved onto tapping on Wednesday. 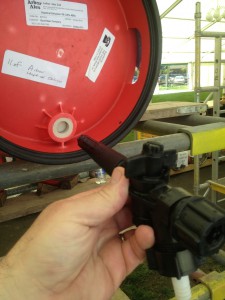 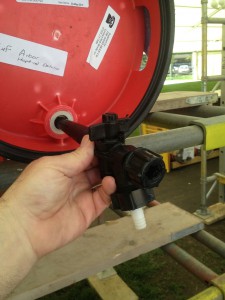 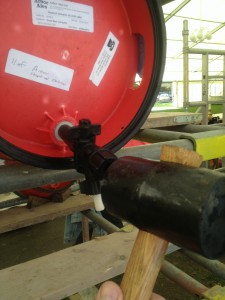 This above tap allows a hose to be attached to a beer engine or hand pull. There are other taps that have a twist valve to gravity dispense. As shown in the video below.

The beer is checked for clarity, aroma and taste and isn’t served until the cellarman has determined these are proper. Some beers will take longer than others to clear. Allowing the beer to sit longer will usually accomplish this.